It should be noted, however, that while McIlvain adheres to these standards, we also recognize their shortcomings. Therefore, the NHLA grading systems are used as more of a starting point than as the final word on a particular lumber’s quality. One of the main reasons that the NHLA standards are somewhat imperfect (although still with merit, to be sure) is that they were originally developed for use in the furniture industry. 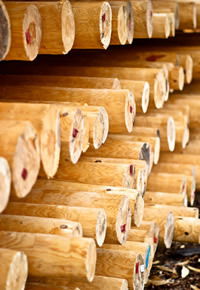 This is understandable considering the fact that at the time of the NHLA standards’ development, the furniture industry was the single largest consumer of lumber in the country, but now that other industries have moved into the spotlight, evaluating a lumber’s quality in terms of its usefulness as a furniture-making wood seems slightly outdated to us. Projects requiring architectural millwork, for example, would grade a wood’s quality much differently, as would applications requiring longer runs.

However, despite its minor flaws, the NHLA grading system is still the industry standard for evaluating a lumber’s quality, so it behooves lumber suppliers and those companies with close ties to lumber suppliers to understand the system. Below is a list and explanation of each of the NHLA’s lumber grades, from highest to lowest:

FAS was once shorthand for “First and Seconds,” and this grade is reserved for only top-quality hardwood lumber, the best of the best. Most of the United States’ kiln dried FAS lumber retails for at least $2 dollars per board foot, even wholesale.

This high-quality lumber has one face that meets the standards for an FAS grading, and it must be six inches or wider. Wood with this grade is often used in the southern regions of the United States or is exported to other countries, and because it is sometimes difficult for non-experts to distinguish from FAS lumber, FAS 1-Face often retails for much the same price.

Lumber with this grade has one face that meets the standards for an FAS grade and one face that grades as No. 1 Common (detailed below), and like FAS 1-Face, Select grade lumber is often sold for a similar price as FAS grade wood. This grade is often exported, but it is also routinely used in the northern regions of the United States.

This lumber is often simply referred to as “No. 1” or “Common,” and it is standard furniture grade wood.

Often called just “No. 2 Common,” this grade wood is the standard for millwork and cabinetry. It is also sometimes used in furniture-making.

This grade is similar to 2A Common, but it contains some coloring defects. It is most often used in applications where the final project is to be painted.

Lumber at this grade is often combined with No. 3B Common (detailed below) and is often used for flooring applications and pallets.

This is the lowest grade of lumber, and its worth is determined by sound cuttings, not clear cuttings. This type of wood is most often used to make pallets and crates.

Learn more about the lumber industry in the United States: