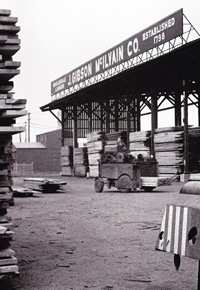 In a day of throw-away products and fly-by-night companies, it’s remarkable to find a company that’s been providing quality materials for over 200 years! J. Gibson McIlvain takes pride in providing responsibly harvested domestic and exotic hardwoods and softwoods as well as hardwood plywood and an extensive amount of millwork. This American gem was hewn out of the rough soil of the Colonial America when the McIlvain family first came to what’s now the great US of A, all the way back in 1740.

The first McIlvain to get started in the lumber biz was Hugh McIlvain, who started his own lumber yard on the banks of Pennsylvania’s Schuylkill River in 1798. Far from the already-established “board yards” along the Delaware, his locale was ideal for the westward expansion involved in Philadelphia’s early urban sprawl. Close in proximity to new bridges and Baltimore, growth was imminent for the young, family-owned company. While Napoleon’s Conquest was going on in Europe, Thomas Jefferson was enacting international trade embargoes here, causing many exporters to go under. The Embargo Act of 1807 was just the first of many hardships through which the McIlvains would continue. In the midst of those economic hardships, McIlvain Lumber continued to prosper.

Many of the buildings that represent the founding principles of our nation were built with McIlvain lumber. Such iconic erections include the following:

In 1898, McIlvain Lumber celebrated its centennial year of business. The New York Lumber Trade Journal honored them with these accolades: “What the [McIlvain] family does not know about lumber is certainly not worth studying. Some lumbermen come and others go, but the McIlvains go on forever.” How much more are such words appropriate after more than 200 years of successful experience in the American lumber industry? 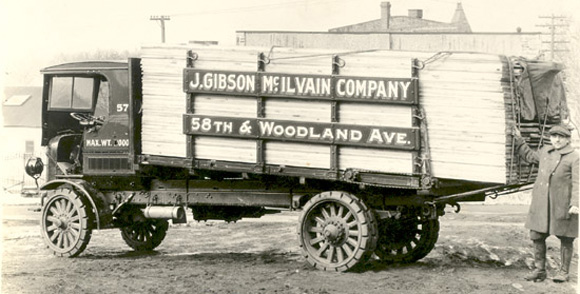 Cabinetmakers were among the company’s first devotees, but continued prosperity came as McIlvain lumber was used by industries ranging from railroad to shipping and even the automotive industry. A major expansion for the company came in 1960, when a warehouse was erected along the railroad, just north of Baltimore. That same location serves as the company’s headquarters today, providing an ideal location for importing lumber from exotic sources as well as transporting it via rail throughout the U.S. Many of the international partnerships forged during the 1970s continue to thrive amid the changing landscape of importation regulations. In 1980, J. Gibson McIlvain opened a Danielson, Connecticut lumber yard in order to provide greater storage potential and shipping provisions.

With J. Gibson McIlvain III as president and Caroline McIlvain as the international purchaser, there are now 7th-generation McIlvains working for the company, continuing the longtime legacy. While many aspects of the business have changed over the years, J. Gibson McIlvain’s commitment to maintaining high standards of quality remains.

Learn more about J. Gibson McIlvain lumber company by visiting their website at mcilvain.com or by calling them at (800) 638-9100.